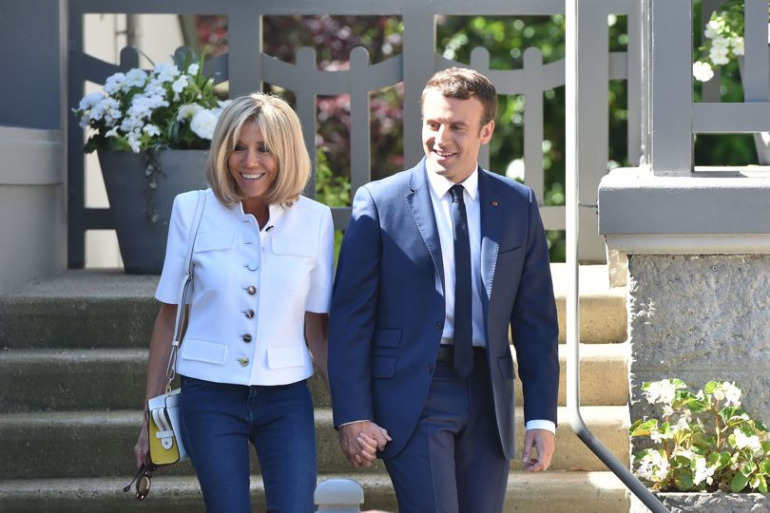 Let's call it the Macron effect. With the arrival of a dynamic new French president – at 39 years old, Emmanuel Macron is the youngest since Napoleon to take up this post – a new spirit is running though Paris fashion. 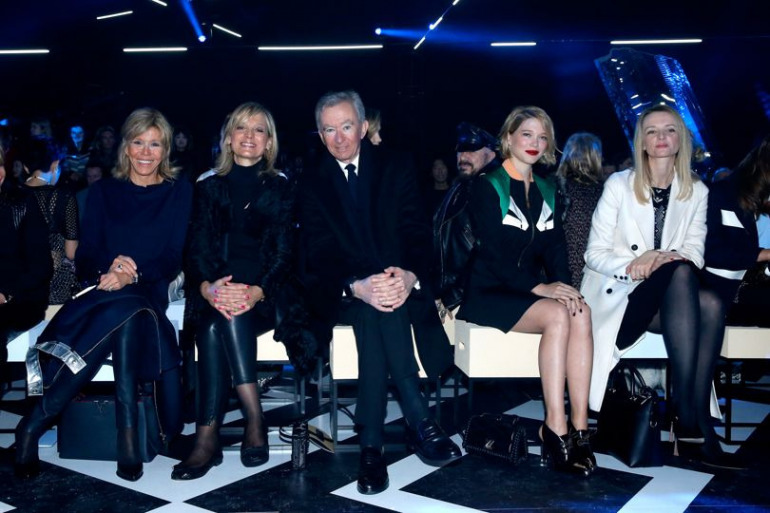 Gone are the rigid rules about the definition of ‘haute couture’ or high fashion. The great names are still to the fore, especially Chanel and Dior – which is celebrating its 70th birthday with an exhibition at the Paris museum Les Arts Décoratifs.

Yet all eyes are on the American invasion: Monique Lhuillier, Proenza Schouler and Rodarte – all deciding to show in Paris, rather than New York. They join Miu Miu, which Miuccia Prada had previously shown in Paris; and Australian Toni Maticevski, offering a collection that encompasses resort, ready-to-wear and couture.

Whether all these designers can justifiably be stitched into the couture season is not really the point. High jewellery has long since presented at this period. And the old order of shows has been challenged by attempts – mostly in the United States – to close the gap between presentation and delivery. The ‘See Now, Buy Now’ concept has not been a success. But the entire fashion universe has been forced to face up to the digital world.

All that is a long way from hand-crafted clothes made specifically for each client. But the current churning in the fashion industry is no different from what is facing many other areas of commerce.

What matters about this Paris season is that after the agony of repeated terror attacks and a stagnant political scene, the low spirits in the city are rising.

Rodarte: Glory of the garden

With flurries of flowers filling a green garden surrounded by an ancient abbey, the Rodarte runway had a sweet whiff of a John Galliano show for Dior long ago. 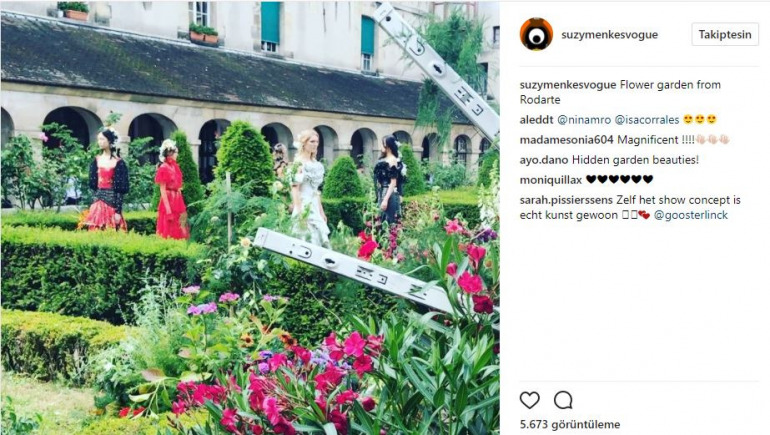 For the Mulleavy sisters to show during the Paris season seemed natural: a rosy romance with a touch of the dark side seemed a perfect fit for the Los Angeles duo who never appeared quite at home in New York. 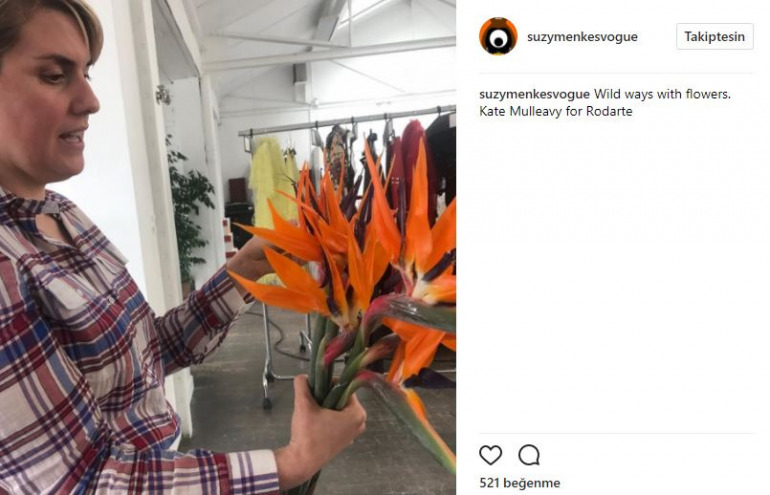 ‘You want to put your best effort forward and Alex de Betak, who’s been helping us for a long time, said that we should show in Paris,’ said Laura Mulleavy, as she fondled fabrics so fine that they were just shadowed by the pattern of baby's-breath flowers. Meanwhile, her sister Kate caressed a Bird of Paradise flower. Other graceful, lacy gowns, also feather-light, followed more awkward sporty clothes that included leather outfits pierced with metal. Even the kindest critic could not see them as couture. 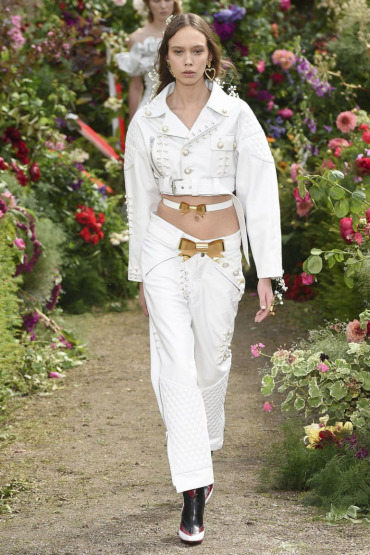 The invitation to American designers officially to join the haute couture season is part of French fashion's ruling body to open the sometimes stuffy windows and let in the international air.

Frayed posters on the school windows outside the Rodarte show deplored the possibility of the rightist National Front getting an important position in the election won by Emmanuel Macron. But the Rodarte's references were rather to movies, especially, according to Laura, Robert Altman's 1970s mystery thriller Three Women.

With their own movie Woodshock coming out in September, the Rodarte sisters will have a further worldwide reach. They belong to the international fashion world. They deserve a place on the Paris calendar. But their clothes too deserve Parisian skills and perfect handwork so that their fashion offering is as good technically as their dreams.

We are so excited – the whole thing of the history of Paris and couture, the work of artisans,’ said Jack McCollough, while co-designer Lazaro Hernandez said that the collection was still intended as ready-to-wear for Spring/Summer 2018. 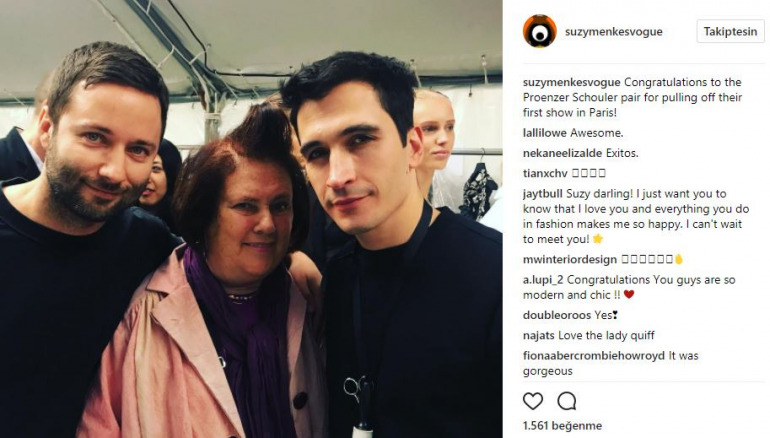 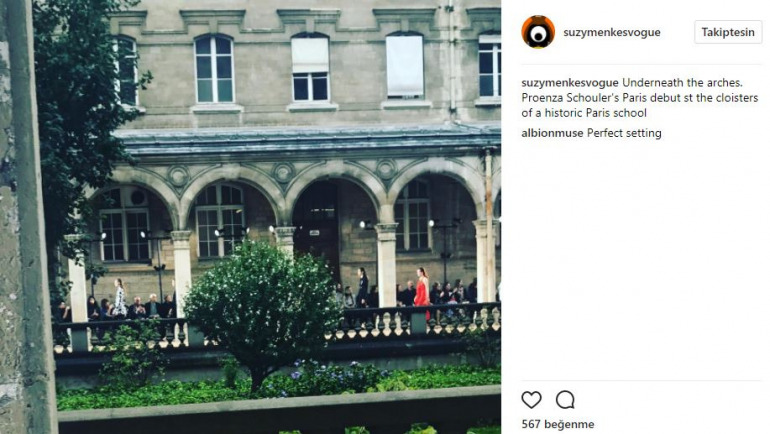 This Proenza Schouler show was held around the cloisters of an ancient lycée with flashes of scarlet or black and white flat flower patterns popping up among the old stone work. The effect was both noble and charming. 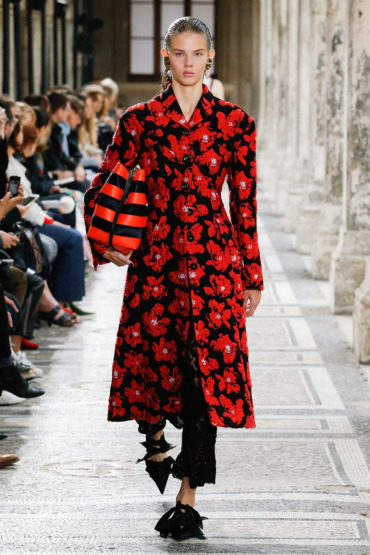 The clothes were finished off with flat pointy footwear, curving or with a swooping bow, and that brought to the collection the modernity and the craft associated with the duo. 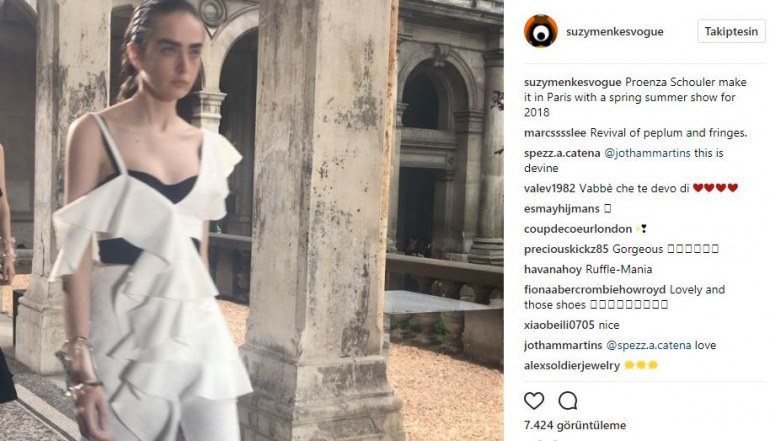 But, as ever, there never seems to be a really powerful or radical statement. Expecting the pair's favourite external bra? Well, there it was. 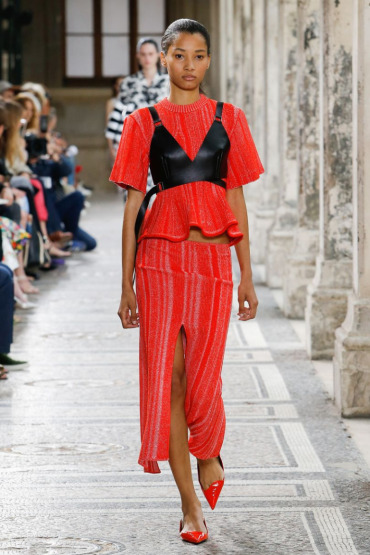 The idea that the Proenza move to Paris is also about sales was proved by a connection with newly launched LVMH 24 Sèvres shopping channel, which threw a lunch for the American duo. 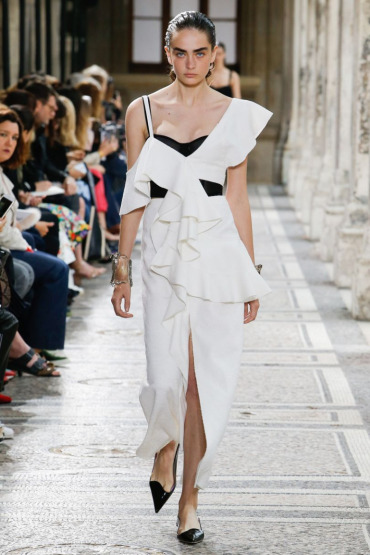 The couture connection was suggested by the crafty cutting that created a rivulet of ruffles down the front of a fresh white dress. Flower patterns gave a predictable but stylish decoration. Ditto for delicate Parisian embroidery.

The designers know how to make pretty clothes with a modern touch, using palest lavender,peach lace or fluffy feathers.

The verdict on the Proenza collection in Paris? A show that was effective in its cut and drape – but not with cut and thrust.

Our new president is a breath of fresh air and optimism,’ said Pierre-Alexis Dumas, artistic director of Hermès, referring to the arrival of Macron.

Showing, as ever, in the upper floors of the historic Hermès store on the Faubourg Saint-Honoré, this season's twist was a path of zen pebbles which a Japanese team kept in shape with brushes. 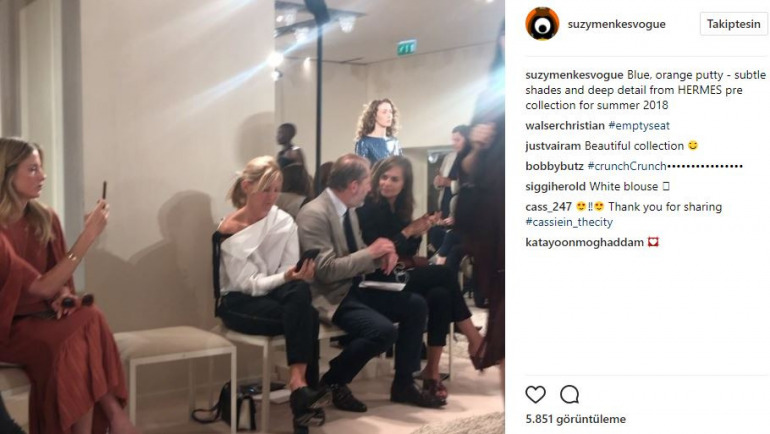 That attention to detail is the essence of Hermès, which has a programme describing every detail of fabric, construction and accessorisation – with close-up pictures to match.

Yet all these accoutrements for couture are for a 'pre-collection' delivered in store in early November, the zenith of the selling season. 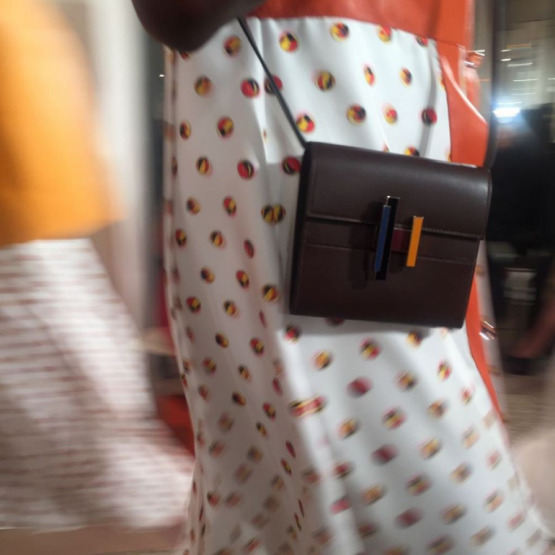 Creative director Nadège Vanhee-Cybulski produced a faultless collection, playing with shades of blue as well as the house's more familiar orange lightening to apricot. Using prints seems natural to this designer, as does as her grasp of tailoring that gives lightness and ease. Bags with blocks of colour were another stamp of Hermès style and, for a small surprise, chalky patterns decorated models' faces.

It seems ironic that the one house totally suited to producing haute couture has no desire to extend beyond the supreme and gracious luxury of its high-end ready to wear.

With just three colours – black, white in its many shades, and orange, Toni Maticevski brought his skills from Sydney, Australia to Paris for the very first time. 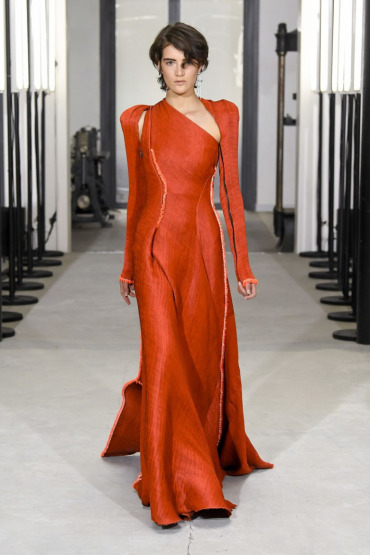 ‘I really embrace the body and for me it is making sure I can shape and sculpt the way people want to look,’ said the designer.

His skill was to drape and shape while keeping absolute control of the female form. However many layers were used, they fitted comfortably. 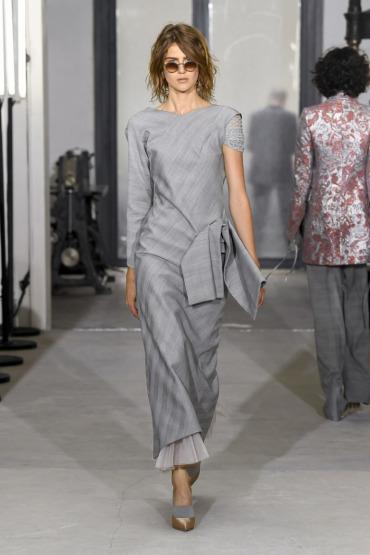 ‘I invest a lot in the craft of my clothes and showing at this time was a nice moment to come in – joining the dots, I guess,’ Maticevski said. ‘Yes, I plan to come again to Paris. This show was my testing ground.’ 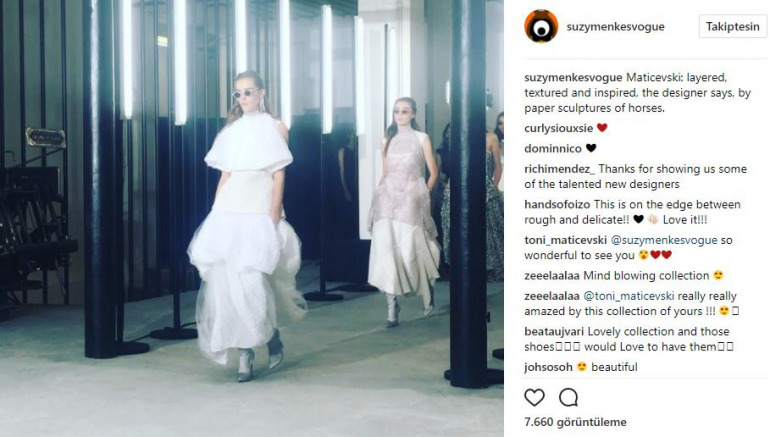