Guccify Me! An Ode To Florentine Art 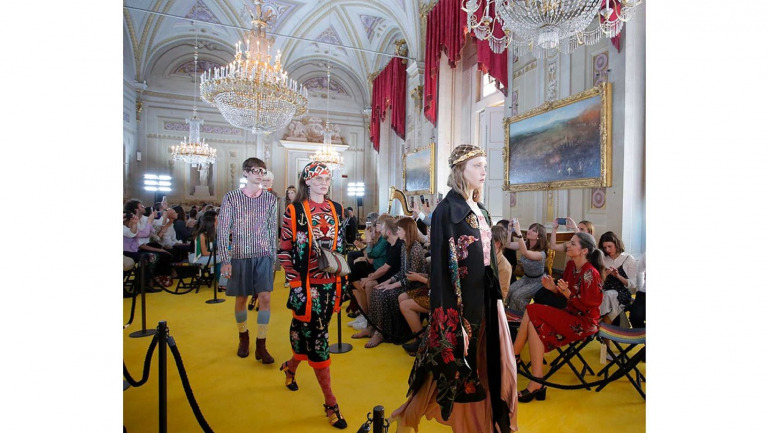 Gucci Cruise 2018, held in the Palatine Gallery of the Pitti Palace COURTESY OF GUCCI. PHOTOGRAPHY BY DAN LECCA

Along climb up the noble stone staircase, and then a sharp intake of breath in front of powerful paintings: Botticelli, Caravaggio, Rubens, Titian, Velázquez… 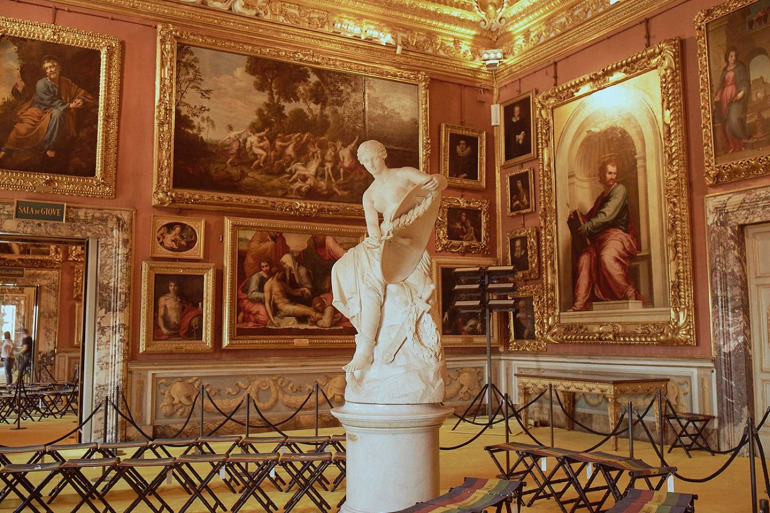 The showspace for Gucci Cruise 2018 was the Palatine Gallery of the Pitti Palace in Florence COURTESY OF GUCCI. PHOTOGRAPH BY RONAN GALLAGHER

More! More of this Florentine idyll, along the secret corridor built by the Medici family, lined with portraits and with windows looking out over the River Arno. Only tourists in shorts and T-shirts walking across the Ponte Vecchio interrupted this dream of the Renaissance brought back to life. 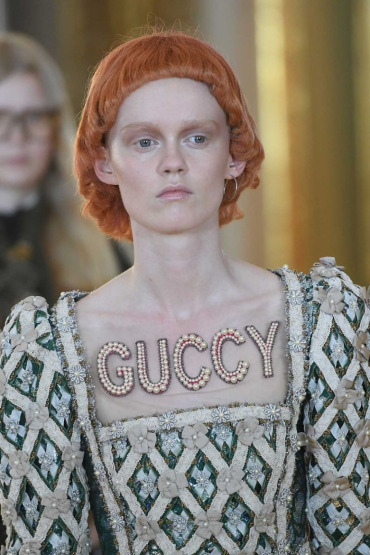 "Guccy", "Guccify Yourself" and "Guccification" were slogans that featured in the Gucci Cruise 2018 collection GETTY

Surely Gucci could not pull this one off? A Cruise show in the Palazzo Pitti, paying homage to its city of birth and memories of Florence in its glory days?

Would Gucci’s €2 million gift to restore the Boboli Gardens at the Uffizi Gallery, glowing with lush summer greenery, save Creative Director Alessandro Michele from the chutzpah of taking on the greatest artists of Western civilisation? Could fashion really match their lyrical and spiritual grace, just to join the current race to take Cruise collections to lavish locations?

Even if you lowered your eyes from the intricate painted ceiling and myriad masterpieces on the walls, there at floor level, as seating for the audience, were stools decorated with fragments of poetry from Lorenzo de Medici’s “A Song For Bacchus”.

In each of the seven rooms, a harpist plucked at the strings as the parade of gawky male and female models strode past, their dress codes swinging between the 1470s and 1970s. Picture a tiny silver laurel crown in hand or on heads, a “G” for Gucci hose, and distinctive school-style shoes. Men were in embroidered shorts; women in gilded capes, shimmering silver dresses, or a gown echoing ancient artworks. Some also wore quilted jackets and simple, if lacy, dresses. But even in Renaissance gear, neither gender lost the quirkiness that the designer has introduced to Gucci. 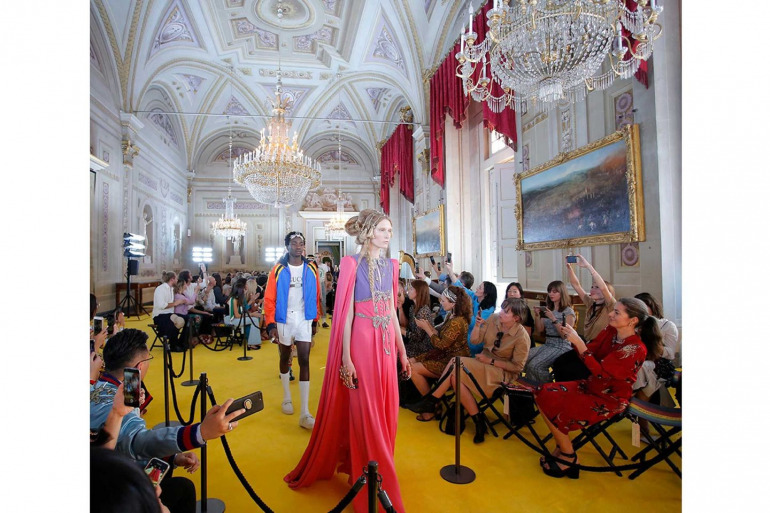 The entire collection was illuminated with rich colour, which made so many outfits seem to be destined to work as separates. Extricate a lacy purple blouse, a scarlet top, and grass green trousers and you had elements to sing a different song. The same was true of clashing patterns, a pink satin blouse for men, embroidered shorts and so on. While the Palatine Gallery seemed to offer artistic absolutes – of creation or colour blending – Alessandro Michele’s aesthetic seems deliberately fluid, even odd.

Backstage, the designer was wearing a T-shirt announcing “Guccify Yourself!” and one of the hessian caps given to guests, each with their name on it. Alessandro claimed Greece, not Florence, was his first inspiration as a location for the Cruise 2018 collection.

“It was the Acropolis!” he said, referring to the ancient Greek temple, in the spirit of the previous Gucci show in London’s Westminster Abbey.

“It was all about Greek and Roman culture – the essence of the Mediterranean,” the designer continued. “It was Florence, Napa Valley, and my mind was completely in LA.”

Somehow, against all the artistic odds and the unlikely blends of past and present, bright colour, rich fabrics, and unlikely mash-ups, the designer pulled it off.

That was partly because we had seen most of this before: the meld of sport and swishing historical elegance, geek and glory. Alessandro’s collections do not fall far from his creative tree.

Yet so many ridiculous mixes could be broken down into one relatively simple vision, which might be stronger (and certainly more commercial) than the sum of its parts. That is the essence of Gucci today: creating objects of desire bundled together as if wearing a mini collection on one back.

Where can Gucci go from here? Do the shows need to be calmed down? Is too much really never enough?

It is the designer’s skill to turn his audience into true believers. As we exited the Palazzo Pitti and its treasures to cool down in an enchanted garden, where the trees were illuminated with deep purple, so many men and women were wearing Gucci. Perhaps there is a fashion Renaissance with a capital “F”, after years of minimalism.

Gucci was born in Florence in 1921. This Italian city is its artistic and spiritual home. How would this show have looked against the noble stones of the Parthenon? Maybe Alessandro was fortunate that the Acropolis was not on offer.